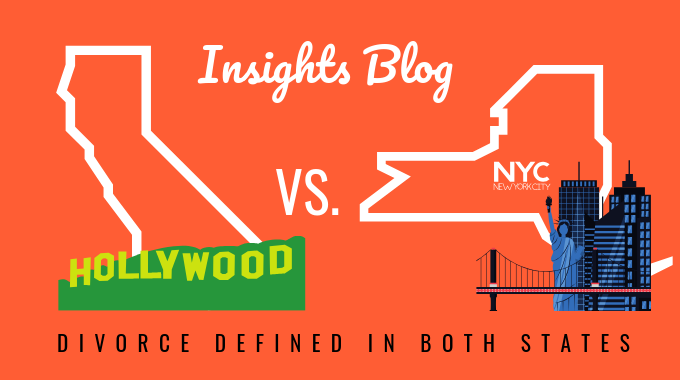 Filing for Divorce in California vs. New York

For couples who have bicoastal residences, the decision to file for divorce in New York or California may drastically change the divorce process and the terms of the marital agreement. Furthermore, doing the legal research on this topic may be complicated, tedious, and ultimately incomplete, given the lack of accessible resources. In an attempt to make your life easier, we have distinguished the key differences that you may want to consider before filing your divorce in either state.

In contrast, the only way that you can qualify to file your divorce in California is if you or your spouse has lived in California for at least six months prior to filing your initial paperwork.

Another difference is that in California, the same court will handle all matters relating to a divorce case, including granting the divorce, and making decisions related to custody, support and marital property. In New York, on the other hand, the Supreme Court grants the divorce, while the family Court will govern issues related to child support and spousal support. This means that New York couples who wish to have a judge make decisions for them related to support or custody issues must deal with two separate courts in order to deal with all the aspects of the divorce. For couples who want to file an uncontested divorce in New York, they will only have to submit paperwork to the Supreme Court, and no court appearance is necessary.

Cheapest Way to Get Divorced

Courts in New York require the parties to list the grounds for divorce. These grounds include reasons such as (1) adultery, (2) irretrievable breakdown in relationship for a period of at least 6 months [no fault], (3) cruel and inhuman treatment, (4) abandonment, and (5) imprisonment.

The parties do have the option of choosing a “no fault” divorce by filing the grounds as an irretrievable breakdown in the relationship. If they choose to pursue a “fault divorce”, they must prove why it’s their spouse’s fault with evidence. For example, if one chooses to file for divorce based on the adultery of their spouse, they must prove that their spouse committed adultery with “clear and convincing” evidence. Therefore, it is required that they air their spouse’s dirty laundry in Court. Choosing to allege “fault” affords an opportunity to leverage bargaining power in negotiation, but it also may increase litigation between the parties which can be expensive, and may cause emotional harm. While some couples may want to file a fault divorce, It’s Over Easy only handles uncontested divorces, where couples wish to proceed with a no-fault case.

California is a “no-fault” divorce state, meaning that the grounds for the divorce are inconsequential to the divorce proceedings and will not be taken into account by the Judge in any regard. A spouse’s marital misconduct will not affect the terms of the settlement agreement, including but not limited to child custody, spousal support, or property division. This system is advantageous for couples who want to divorce without the Court determining blame. But, it is important for some people to get the validation of a Court attributing fault onto their spouse and California Courts do not afford that opportunity.

New York uses a systematic method to calculate child support. Generally, New York Courts multiply the parent’s combined income by a percentage: 17% for one child, 25% for two children, 29% for three children, 31% for four children, and 35% for five or more children. The Court also divides that amount by each parent’s income and they will normally review the formula to determine if it is fair based on various factors. These factors include the financial resources of each parent, the health of the child, the standard of living that the child would have enjoyed had the parents not divorced, and various other factors.

Before filing for divorce, it is important to know what the process looks like in your state. While it is not possible to predict the terms of your divorce just by looking at the laws, it is still important to know what aspects about your circumstances will be relevant to a Court and which ones will be immaterial. By gaining more information, you will be more acquainted with the process and hopefully have a smoother time navigating your state’s Court system.