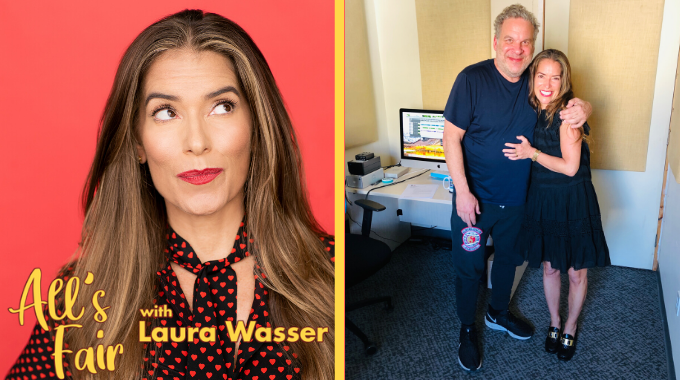 Speaking about his ex-wife, Jeff said, “I want to be friends with her forever, and I love her, but she doesn’t have to. But I’ll still take care of her...we spend time together, we have meals together, and we all love each other.”

Jeff shares new details about his relationships and shared history with other famous comedians.. He reminisces about previous TV show roles and takes a very firm position on people who vote for Donald Trump.

“The sixteenth century proverb, ‘all’s fair in love and war’ speaks volumes about human relationships, and often describes situations where people don’t follow the usual rules of behavior,” Laura said, drawing the comparison between divorce and politics, both of which she affirms terrify everyone.

“During a time of transition and upheaval, everything is fair, and frankly, nothing is fair. Divorce, and possibly politics, are the great equalizers,” Laura explained.

All’s Fair co-host and It’s Over Easy’s Chief Content Officer Johnnie Raines reminds  everyone of the importance of voting in the primary elections - a truly timely message when primary voter turnout is often the deciding factor in an election.

Also in the episode, they discuss Jeff’s current projects, including his new stand-up special Our Man in Chicago, which is available globally on Netflix. Also, the Leica Gallery L.A. recently hosted his photo exhibit Big Bowl of Wonderful, which helped raise money for F*ck Cancer, a nonprofit dedicated to the prevention and early detection of cancer.

Each week on the All’s Fair with Laura Wasser podcast, Laura and Johnnie speak with experts, celebrities, and innovators regarding all kinds of relationships, breakups, love, war and everything in between.

About it's over easy

It's Over Easy helps divorcing couples become the masters of their own destiny. The company was founded by Laura Wasser, a family law attorney with more than 20 years of experience. Laura is frequently called upon as the preeminent voice on TV, in print and across the media landscape in newsworthy matters regarding Divorce and Family Law.  She and her team have developed an intuitive and simple process for uncontested divorces available to everyone.