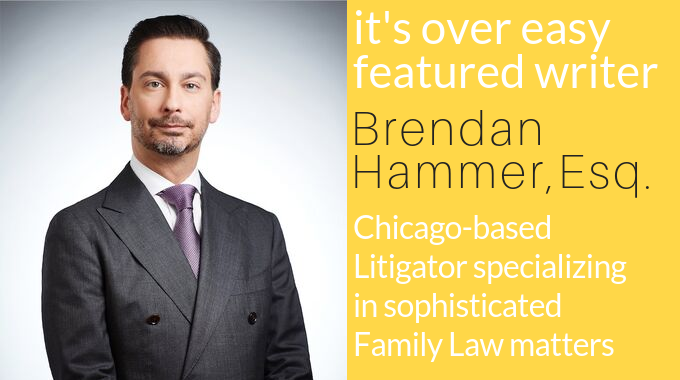 September 25, 2019 By Brendan Hammer, Esq. How to Divorce, Illinois Divorce

Illinois’ divorce laws are found in the Illinois Marriage and Dissolution of Marriage Act (IMDMA) which contains specific sections regarding virtually every aspect of a divorce case--from property, child support, and maintenance, to college expenses, parenting time, and decision-making rights. Although the IMDMA has been in place for nearly 40 years, it has undergone a number of revisions and amendments, and recently, has significantly changed longstanding Illinois law in a number of crucial areas.

In Illinois, when a couple divorces, a court will allocate marital property “equitably.” Although equitable distribution can mean equal distribution, there is no presumption either in favor of, or against, a 50/50 division of marital assets. Instead, the law establishes a list of twelve factors for a court to consider in awarding marital property and does not permit consideration of fault in such an award. Some of these factors include, but are not limited to:

Also, Illinois law permits a court to consider the “dissipation” of marital property by a spouse in making an award of marital property. Dissipation, as a matter of law, is the expenditure of marital funds for a purpose unrelated to the marriage at a time when the marriage is undergoing an irretrievable breakdown. In other words, money that a husband or wife spends for a girlfriend or boyfriend, for lavish expenditures for only the spouse alone, for drugs or gambling, etc., may all be considered by a court. Importantly, only dissipation occurring within three years of when a party knew or should have known of the expense, and in no event prior to five years before the divorce filing may be considered.

Until recently, Illinois child support was awarded pursuant to a percentage-of-net-income guideline framework. For example, a parent paying child support for one child would, typically, pay 20% of his or her net income to the recipient spouse. Currently, Illinois has implemented an Income Shares model for child support. This approach has fundamentally reconfigured child support in Illinois. Now, the income of both parties is considered and the amount of overnight parenting time with a child is a factor that can directly impact the amount of the child support award. The method for calculating child support where combined annual gross incomes are less than $500,000 per year now requires the court to:

Illinois law awards maintenance (formerly known as alimony) based upon a consideration of a list of factors. In general, until recently, maintenance awards were meant to provide for a recipient spouse consistent with the “standard of living” established during the marriage. In addition, the law did not provide directly for any time-limit upon that maintenance award; and, in marriages of over ten years, any such award could not be made terminating or limited in duration at the time it was first awarded.

Presently, if the combined gross annual income of the parties is less than $500,000 and the payor has no obligation to pay child support and/or maintenance from a prior relationship, maintenance awards will be 33.3% of the payor's net annual income minus 25% of the payee's net annual income, unless the court makes a finding that the application of the guidelines would be inappropriate. The amount calculated, however, when added to the net income of the payee, shall not result in the payee receiving an amount that is in excess of 40% of the combined net income of the parties. The duration of an award is calculated by multiplying the length of the marriage at the time the action was commenced by a percentage that’s dependent on the number of years the couple was married.

In Illinois, emancipated or non-minor children of divorced parents have a statutory right to financial contribution from their parents for college expenses. That award can be made from property or income of either or both parents. These expenses include not only tuition, but also fees, books and supplies, housing and meal expenses, medical and dental expenses and the reasonable living expenses of the child during the academic year and periods of recess. However, with respect to tuition, housing, and meals, the maximum obligation of parents is capped or limited to the cost for in-state tuition and fees at the University of Illinois at Champaign-Urbana. Similarly, housing and meal expenses are tied to the cost for a double-occupancy room with a standard meal plan in a residence hall at the University of Illinois at Champaign-Urbana.

It is possible, based upon “good cause shown” for a court to award sums in excess of these limitations. In addition, the law also provides for the payment of support for non-minor children with disabilities pursuant to a series of express factors.

In order for both parties to participate meaningfully in an Illinois divorce case, the IMDMA establishes a set of specific rules for the award of attorney fees. Known colloquially as a “level playing field” law, the IMDMA attempts to ensure that neither spouse can use attorney fees as a means to obtain leverage and advantage in court.

In general, attorney fee awards are treated as an advance against a party’s ultimate share of the marital estate. However, recognizing that other financial factors and circumstances may make such an approach inequitable, the law also permits a party, at the conclusion of a case, to seek contribution to their attorney fees from the other party based upon a list of considerations found in the IMDMA.

Illinois awards parenting time of a child (formerly known as “visitation”) based upon a series of factors, all of which rest upon a “best interests” standard. In Illinois, unlike certain other states, there is no statewide parenting time order or template or schedule, and a court will fashion a schedule based upon the facts of each case. In general, a court considers the following seventeen factors:

Illinois law allocates “significant decision making responsibilities” (formerly known as custody rights) in four specific areas based upon the child’s “best interests.” Generally, such rights pertain to: Education, Health, Religion and Extracurricular Activities. In order to make an allocation of those decision making rights and responsibilities, a Court will consider a list of fifteen specific criteria including but not limited to:

In order to restrict decision-making responsibilities or parenting time with the child, the party seeking such a restriction must demonstrate beyond a preponderance of evidence that a “serious endangerment” to a child’s mental, moral, or physical health exists or it must be shown that a parent “significantly impaired” a child’s emotional development.  After such a showing is made, a court may enter orders that:

The IMDMA permits a court to order individual counseling for a child, family counseling for one or more of the parents and the child, or parental education for one or more of the parents. In order to make such a determination, the court must find that certain criteria are met, including but not limited to, abuse of parenting time, endangerment to heath, impairment of emotional development, and violation of a judgment regarding conduct affecting or in the presence of a child. Importantly, all court-ordered therapy sessions are confidential and any communications made in counseling shall not be used in litigation between the parties or relied upon by any expert appointed by the court or retained by any party.

Relocation of a Parent with a Child

Illinois law permits a parent who has equal parenting time (or more) to relocate to another state under certain circumstances. Currently, such a relocation (formerly known as “removal”) will be permitted where the parent requesting the relocation establishes facts that meet eleven specific criteria in the IMDMA. The assessment of these criteria is, like most matters in Illinois law, made pursuant to a “best interests” standard.

The relocation criteria are as follows:

It is important to note that relocation does not apply to every residential move involving a child. As a matter of law, relocation refers to:

Brendan Hammer is an experienced courtroom litigator who represents a variety of individuals from executives and entrepreneurs, to medical/legal/creative professionals, to political figures, professional athletes and their spouses. He concentrates his practice on the litigation and negotiation of complex family law matters. Brendan is certified in divorce mediation through Northwestern University and is on the Faculty of the National Family Law Trial Institute. He serves on the Advisory Council of the David Lynch Foundation (Chicago) and the Advisory Board of Family Law Center of the DePaul University College of Law.