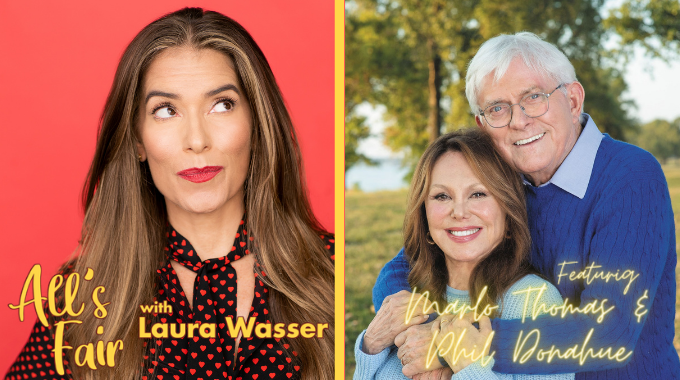 "That Girl” Marlo Thomas and her husband, talkshow host Phil Donahue join Laura and Johnnie for a star-studded conversation about the secrets to a long lasting marriage. Marlo and Phil have almost 30 Emmy-awards between the two of them, but their new book "How to Make a Marriage Last” is the first and only project (aside from their 40 year marriage) that they’ve worked on together. They share details about many of the celebrity and luminary couples they interviewed for their book including Sting and Trudie Styler, George Stephanopoulos and Ali Wentworth, Melissa McCarthy and Ben Falcone, and many others. Marlo also surprises us with her observations on where lust ranks in a long marriage.

Highlights of what we discussed include the following:

About Marlo (from her bio):

About Phil (from his bio):

How they met? (from CBS This Morning & their book galley)

2020 – On May 21st of this year, iconic couple Marlo Thomas and Phil Donahue celebrated their 40th anniversary with the release of their new book, What Makes a Marriage Last. (From their book galley)

About What Makes Marriage Last

Marlo and Phil traveled the country, sitting down on double-dates with long-married couples they admired. The stories they revealed to them about their marriages were both surprising and inspiring. As in the implies, WHAT MAKES A MARRIAGE LAST in not a ‘how to’ book. It’s a ‘what’ book – a captivating collection of deeply personal tales in which they uncovered that unique combination of work and play, and give and take, that created the magic that lay at the heart of their marriages.

Celebrity couples in the book include:

About FREE TO BE YOU AND ME