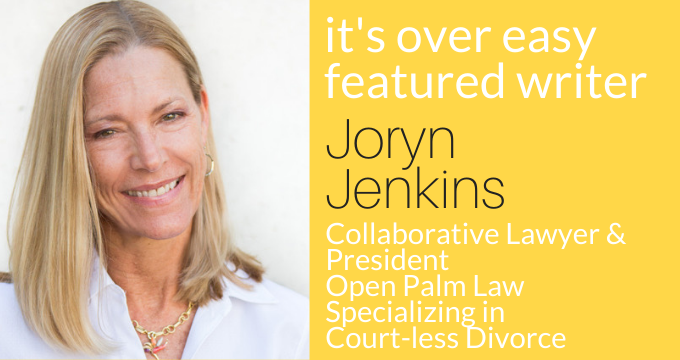 Assuming Your Ex Wants The Best

Written Exclusively for It's Over Easy by Attorney Joryn Jenkins

You’re getting divorced. Don’t lose your head. And don’t assume.

I was recording recently at my video producer’s studio when one of the studio lights suddenly caught fire. I was closest to the flames, and the fabric of the green screen was right next to me, but I hesitated before jumping into action. All I could think about is whether or not the green screen fabric would catch fire if I threw it over the lamp to smother the fire. I had always understood that a large cloth would work, but what if it didn't?

Although the studio was now filled with smoke, my gambit did work, with little harm to Tony’s expensive equipment, other than the one studio light, or, more importantly, to us.

The Cause of the Fire

After we managed to extinguish the flames, Tony and I discussed how the fire might have gotten started. We still had work to do, and Tony had three other studio lights still working. The lamp in question was only three years old, so I deduced that a manufacturing defect had caused the fire. I suggested that Tony complain to the manufacturer. After all, the lamp wasn’t even three years old. This seemed like a plausible conclusion.

And then we found the true root of the problem . . . Tony was sweeping up the ashes and found a big ole’ palmetto bug. We soon realized that the roach had died while standing on the bulb and it was its corpse that had eventually caught fire.

Thinking the Worst in a Divorce Can Destroy You

This incident made me think about how people often jump to the wrong conclusions and how it can affect their outcomes. Take a divorce, for example. In this life-changing event, spouses often feel that they must go to court to get justice, to end their marriages. They even go to litigators who validate their assumptions and who fail to explain all their options.

I do something different for my consults. I describe collaborative law, their courtless divorce process options, and finally, litigation. I include the Default Divorce, Do-It-Yourself Divorce, Kitchen Table Plus Divorce, One Lawyer/One Spouse Negotiations, Two Lawyer/Two Spouse Negotiations, Mediation, Collaborative Practice, and finally, the traditional Courtroom Divorce. I even use a helpful poster that I have created to explain the choices. Most clients come to me with little information and false assumptions. By fully exploring all the options, they can really choose the process that is right for them, their families, and their unique divorces.

What Happens When You Assume

Another assumption that clients often make is that their ex only wants the best for himself and doesn’t care about the family’s needs. Sure, I’ve seen that scenario, but, thankfully, it’s rare. Most people are good people who just want the best for all involved.

If you’re going through a divorce, don’t assume the worst about your ex. If you remember your, and your spouse’s, most important interests often throughout the divorce process, you’ll be more likely to come to a successful resolution that meets those interests.

Don’t assume. Just listen to what Tony Randall had to say about people who do that.

Joryn Jenkins is a trial attorney with 40 years of experience, now in private practice at Open Palm in Tampa, where she concentrates on collaborative law and court-less divorce.

She is a well respected author of several books about the divorce process. While Joryn’s focus during most of her 40 years in practice centered on legal ethics in the practice of law, her current mission is, to “change the way the world gets divorced,” to inform folks as to the alternatives they have when it comes to the process of divorce, and to enlighten them as to which choices will best suit their families and their finances.