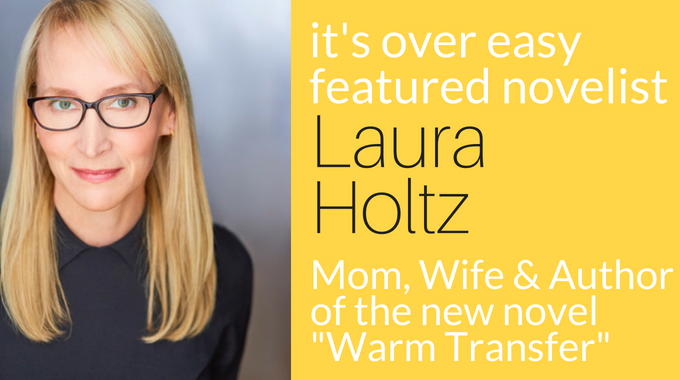 it's over easy Featured in Buzzy New Summer Read!

June 7, 2018 By Laura Holtz How to talk to your family & friends about divorce, Dissolution Of Marriage, Divorce, Strength, Extra-marital Affairs

You can read every divorce self-help book and divorce finance article about the how-tos and don’t dos of this process, but sometimes you also need a story you can relate to. it’s over easy is excited to announce that its services are featured in a buzzy new beach read from debut author Laura Holtz entitled Warm Transfer.

Tamsen Peel isn’t happy in her marriage. Issues ranging from the run-of-the-mill to the run-for-the-hills plague her relationship with high-powered advertising executive Victor. Amid their lavish lifestyle in the uppermost echelon of Chicago elites Tamsen has lost her sense of identity and hope for the future. Enter an attractive and thoughtful young musician hired to give guitar lessons to the Peels’ special needs son, and Tamsen is ushered into the Warm Transfer [May 29, 2018, Gatekeeper Press] she needed but didn’t know she wanted.

We’re excited to include below an exclusive excerpt of this beach read with weighty questions at its center. Whether you’re just thinking about divorce, in the middle of the transition, or have gained enough distance to look back with some newfound perspective, you will enjoy this story and possibly even have an ah-hah moment or two.

Tamsen fought the urge to call Whit. She wanted to hear his voice

and explain why she disappeared at the concert. But right now, Tamsen needed to follow up with the last lawyer on the list Oliver had given her. She had already tried the three best firms: Bays Kreiter Mann, W.H. Drake and Associates, and one law practice that had a string of five surnames beginning with Shank. Victor had met with them all and in doing so, he’d made it impossible for Tamsen to hire any of them. The final firm on Oliver’s list was small, and based on her Google search, it was run by a woman and located in Greenview, Tamsen’s old neigh- borhood. The office of Iona Sullivan.

After a brief explanation of why she was calling, the receptionist transferred Tamsen directly to the managing partner.

“Iona here.” The woman already sounded like a referee with a pack- a-day habit.

“My name is Tamsen Kinney Peel and I want to set up a consultation.”

“P, E, E, L?” the woman asked. “Sounds familiar.” Tamsen heard the tapping of fingers on a keyboard; she held her breath. “Your spouse is Victor Peel?”

Tamsen could barely squeak it out. “Yes.”

“He’s conflicted you out everywhere, hasn’t he?” she said through a mouth full of what sounded like crunchy granola.

“How did you know?” Tamsen asked.

“Because we’re usually the last place men call if they’re covering every base,” she said. “Sorry I can’t help you.”

Tamsen leaned against the wall and stared down at her feet. She’d been shut out.

“Piece of advice,” the woman said. “Stay out of court. You’re going to lose tens, if not hundreds of thousands of dollars in this process if you can’t mediate.”

Tamsen’s legs felt heavy. She did not have access to that kind of money. She recalled an article she’d read on Goop about an online divorce service started by a powerhouse female Hollywood divorce lawyer. It’s Over Easy touted an uncomplicated divorce for as little as $750. Tamsen knew Victor would be amenable to the price—but would he ever be willing to entertain such a civilized way to split? Who was she kidding? There was no way.

A nurse pushing an empty wheelchair stopped and put her hand on Tamsen’s shoulder.

“Are you all right, Mom?” the nurse asked. “Cuz you’re looking a lot worse than Theo right now.”

“It’s nothing,” Tamsen said. “I’m just tired.” Her eyes followed the nurse until she disappeared into the room next to Theo’s.

Petra would understand about trust funds, but the rules in Britain were different. And Tamsen didn’t want to bother her again. Petra hadn’t returned Tamsen’s call from a week ago; she’d sent a text that she was in the midst of the biggest acquisition of her career. Tamsen’s domestic problems could wait. But there had to be someone

she could ask. Someone who knew something about money. Tamsen watched the nurse reemerge, wheeling a girl around Charlotte’s age into the hallway.

The girl had a chin-length, curly black afro with a side part. Her eyes were wide-set and hazel, and she held a book in her lap. Tamsen wondered what ailment had landed her in the hospital, then she noticed the cast she wore on her left leg, the green wrapped plaster running all the way up to her thigh. The girl stared at Tamsen and smiled, revealing deep dimples as the nurse pushed her past.

“Hi,” returned Tamsen. The girl was wearing tartan flannel pajamas. Of course, Tamsen thought. He was a financial genius. She texted Victor.

What time does Neil’s party start?

Laura Holtz graduated from Northwestern University back when Allison Hall was still a single-sex dorm. She took a mid-career break from her job in sales promotion to accept a graduate teaching fellowship and earn a master’s degree in Special Education. When the head of the creative department at her former agency went on maternity leave, however, Laura could not refuse the offer to step into her dream job. She remained in the corporate world until she had children.

Laura has taken on copywriting jobs ranging from her father’s industrial sales brochures to an ad campaign that ran on Chicago Transit Authority buses for two years. She put her talent for writing toasts in rhymed verse to use by composing book and lyrics for her original musical, Gatecrashers, which was a finalist in the Ball State University Discovery New Musical Theatre Festival. Clogs, avocados, and a great co-parenting arrangement with her ex-husband are among the things for which Laura is grateful, but the thing that gives her purpose is the privilege of being Henry, William and Kat’s mom.