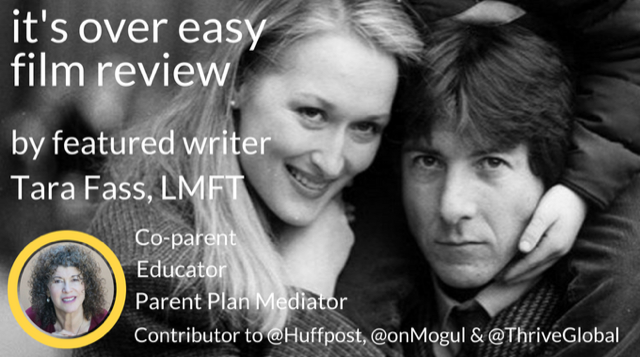 Film Review: Nothing is Black and White in “Custody”

High conflict custody is familiar fodder for movies.  From 1979's "Kramer vs. Kramer"  featuring Meryl Streep and Dustin Hoffman to the film “Boyhood”  that came out a few years ago, most are tame compared to "Custody"

Watching “Custody” reminded me of the days I worked for the Superior Court of Los Angeles as a child custody mediator and evaluator.  We called the public spaces around our office the 'Hall of Tears.'  This film takes viewers on a multitude of harrowing wrong turns and lost opportunities in a bitter custody battle, as a consequence of a messy divorce.

Here are 8 takeaways I had from the film “Custody”, and why everyone should try to avoid a child custody battle.

#1  Important moments for redemption are glossed over:

When the judge asks kowtowed Antoine Besson (Denis Menochet) why his children from his marriage to Miriam (Léa Drucker) have turned against him, he answers, "I'd like to know."  That moment of contrition in the opening scene is never explored.  Most family judges or the lawyers who represent their clients in Los Angeles would have requested orders for counseling, though this is not done in the film - the one and only flaw in terms of the realities of high conflict custody.

Soon-to-be-ex-wife strongly objects to Antoine’s request for joint custody citing his history of violence against her and their older daughter Joséphine (Mathilde Auneveux). Joséphine wants to cut all ties with him.  Since she is of age, Antoine is unable to legally influence her decisions.  For Julien (Thomas Gioria) it is a different case as he is too young to make an officially adult decision.  Even in the letter admissible as evidence the son expresses ambivalence.  There is a hint that if the family's issues were squarely addressed, Julien is in possession of a hidden well of affection for his father.

As their court-appointed judicial officer hears both parties' lawyers they become more human and sympathetic.  Hope intermingled with doubt is abundant.  Antoine may be prone to displaced jealousy and devastating violence which is unacceptable.  It may be concurrently true that he is an exasperated father correct in his assumption that Miriam has not helped the children see he has something other than a paycheck that is valuable.  Miriam could do more to separate her adult relationship as a spouse from her co-parent's role as a father.

#2 Until the emotional divorce is complete, it can be difficult to heal.

Matters in the courtroom move quickly to issues of finances when clearly the more difficult slog are the emotional dimensions which need to be attended to.  It's at the emotional level where the secondary change must take place between the adults so that the children who are the collateral damage in the marital dispute are better served. Finishing the emotional divorce breaks the cycle of dysfunction which does not usually include the couple getting back together.

#3 Anger is the most challenging aspect of contested divorce:

Miriam is seeking sole custody of their son underplayed exquisitely by Julien to protect him from a father she claims beats her.  Brooding Antoine (Denis Ménochet) pleads his case as a scorned dad whose children have been turned against him.  It is unfortunate that the fear for her own safety is transmitted onto the children.  It seems this is the only avenue for vindication now that she is in the spotlight and has the 'power' as the victim.  To their discredit neither party, especially the father, takes any responsibility for his part in contributing to this degraded tight spot where we meet this failing family.

"Custody" shows us how both children in their own way are prone to and contribute to manipulations that muck up the truth.  During custody disputes children are known to push boundaries to the max, perhaps taking the lead on the examples their parents show.  Unsure who is telling the truth, the judge leans on ample evidence that children benefit from having two parents in their lives whenever possible. She rules in favor of primary custody with the mother and alternating shortened weekends with father.

Caught in the middle of his parents' escalating conflict between his parents, Julien in his childlike 11 year old way is elevated to adult status.  In his attempt to quell the viciousness and protect his mother, it is no wonder he suffers from stomach aches.  Of course Julien's efforts backfire in this brutally relentless psychological thriller.  About 7% of all dissolutions are high conflict, but even for children of amicable divorces the demise of one’s parental unit is traumatic at any age.

#5 Flawed spouses can be good parents with the right supports

Both parents appear to genuinely care for their children.  Perhaps Miriam should have worked harder to coax her daughter who sang a hit with her band from Ike and Tina Turner (who had horrific domestic violence issues) at her party to invite her father.   Excluding him further did not help.  Perhaps he could have been accompanied by his parents as support.   Josephine and Julien's paternal grandparents are also other collateral damage in this ugly parting of the ways.  Antoine is a man in extreme pain with long simmering hurts that surface as unjustified monstrous rage in the impending split.

#6  Children should be heard while acknowledging they can be triangulated into the unholy tribal warfare:

Even when Miriam’s lawyer presents evidence of an injury Joséphine supposedly suffered because of Antoine, we get a whiff of how lawyers expand the negative to 'win' their client's case to the detriment of the family reorganization.  Relying too heavily on children's testimony often inflames the problem of kids being caught in the middle.  The less damning explanation offered by Antoine's lawyer may be the more credible. One of the problems with inter-parental conflict is that the parenting in general loosens and teens are known for using this to wriggle out of parental influence at a time when they still need care and oversight.

Even though Antoine ultimately blows the opportunity, he is given the benefit of the doubt when granted joint legal custody.  The assumption is that with time cooler heads will prevail and the family will heal.  He clearly needs more support and a lot of help to be the positive influence he yearns to be.

No one likes to be told what to do especially when they feel vulnerable. Developing a safe and trusting relationship with a seasoned therapist is difficult enough. Being forced to do counseling makes the task even harder.  Men's anger, especially for men like Ménochet who is physically big, prone to grimacing and who hunts as a hobby, can be a scary and imposing presence even when he is calm.  How ironic because in his day job he is in charge of fire safety for a local hospital.

Antoine and Julien are often placed in claustrophobic spaces like cars and a dining table, the visual frame confining until we feel as pressured and trapped as these characters do especially when emotions run high.  In several scenes struggles explode in the car before and after transitions in care (hardly easy under the best circumstances) from one parent to the other.  In one scene a fight ensues around an otherwise light moment eating a scrumptious meal prepared by paternal grandmother between paternal grandfather and son, giving a nod to a history of trouble between the generations.

#8  "Custody" is a must see for anyone involved in a separation or divorce:

Actor Gioria as Julien gives a tour de force performance.  His often silent expressive face and weary body telegraphs hyper-vigilance alternating with sad resignation of one who feels powerless.  Glimpses of excitement or relaxation are quickly shut down and Julien exists mostly under emotional duress.

The fact that Julien is not deterred in his determination to protect his mother to the extent that he lies and further mucks up a complicated situation is truly upsetting.  More than an unfair burden for Julien to carry, unfortunately it is also quite realistic in domestically violent situations.  There is a chase scene in this film, the consequence of which the adults realize their youngest has unfairly become the proverbial canary in the coal mine.  Just maybe the adults can arise to the occasion to do better.  We are lead to believe for a few minutes that maybe from the wreckage some good will be achieved.

Miriam imprints onto Julien her air of weakness, dependence and resignation.  Has she has not worked outside the home to earn a living?  Once her life settles down will she look forward to job training, or do her energies focus solely on forming another relationship?  What are her capacities to lead an independent life?

It is suggested that Miriam was reluctant to expose Antoine for domestic violence in the marriage, or that the system failed to protect her and the children.  Perhaps it was some combination of factors.  A First World modern woman, who in the end is protected by an older woman with an Arabic last name, passivity has not served her or her extended family well.

The film climaxes into full-frontal thriller mode.  “Custody” is gut wrenching and life-like in its depiction of a family deconstructing in free-fall without useful professional intervention.  Could these new fresh lows signal a chance for the father to have a 'come to his senses' moment while in the cooler?

"Custody” is not gratuitously violent.  Its’ realism amply illustrates why the time after physical separation can be the most dangerous in violent families and why law enforcement officials routinely cite domestic disputes as some of the most dangerous.   The homicidal/suicidal aspects of the subject matter this movie tackles could be tremendously triggering.  For these reasons and more be aware to exercise caution while viewing.

The film opens in Los Angeles on Friday July 13th, and will roll out in select cities throughout the summer. The New York premiere was on June 29th.  For more information, click here to read what The Los Angeles Times had to say about this profoundly thrilling French thriller.