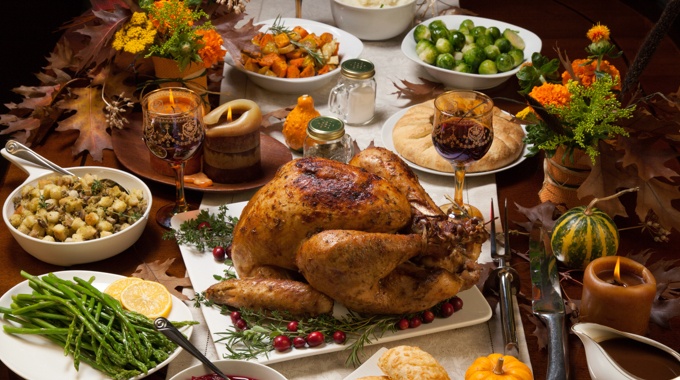 From The Desk of LAW | Avoiding Thanksgiving Brought Us Together

Thanksgiving was never my favorite holiday -­‐ even before my parents got divorced. I don’t really like the food. The colors are – blah. And because all of our family lived within a 10-mile radius of our house, getting together for a holiday meal was not exactly a momentous event.   Then my parents split up, and I had to do it twice. Two turkey dinners; one at my mom’s and one at my dad’s. Both of them grumbling about either having to start early and drive my brother and me to the other's halfway through the meal or waiting for us to arrive (generally later than promised) to begin their celebration. It was a total bummer.

When I got to college, I pretty much avoided the entire thing by traveling with friends or saying I had too much studying for finals to come home for the long weekend. Finally, when I was back in Los Angeles and attending law school my mom, Claire called me out, “Darling, have you been avoiding Thanksgiving?”

“Because it is a pain in the ass to have to divide the holiday and schlep from your house to dad's in order to see family that is not all ours. And I don’t like the colors – or the food.”

“My food in particular or all turkey, gravy, stuffing and cranberry sauce?” (My mom is gravely aware that my brother, Dustin and I do not feel that she is the best cook.)

“All of that stuff – whoever makes it. Just not my thing. If you guys were so into Thanksgiving, you shouldn’t have gotten divorced back in the 80’s.”

My mother Claire who is a very wise individual if not a great cook, left it at that. For a day.

The following afternoon the phone in my apartment rang, and it was my parents – both of them – on a conference call.

Note: everyone's names have been changed throughout this story, but this is how the call went:

“We have a proposal for you” my father began. “Mom says you don’t like having to divide Thanksgiving, so you have been avoiding it. She and Frank have been kind enough to invite Esther and me to their home next Thursday night, so we can all do Thanksgiving together. If we were to accept their generous invitation, would you and your brother come as well? I want to make certain because as you know, I am not a fan of your mother’s cooking and if you guys don’t come, Esther and I will probably just stay home.” (My father is not one to mince words. Nobody really loved Mom’s cooking – she has lots of other awesome qualities.)

I was a bit taken aback. My parents had the most amicable of divorces when my brother and I were adolescents, and we still made most decisions as a family of four. They were both at my high school, and college graduations and I knew that they spoke about once every couple weeks regarding my brother, Dustin and me. But a blended Thanksgiving?

I called my brother, a much nicer person than I and far more tolerant when it comes to family. I knew he would want to go and would convince me to slap a smile on my face and show up at my mom’s house with a pecan pie or some sunflowers. Which he did. And I did. And from then on we have been doing Thanksgiving all together pretty much every year.

Now I have two sons. They have two different fathers. Although my romantic relationships ended with each of these terrific dads years ago, they have accepted our family tradition of doing Thanksgiving together for the benefit of our children. My boyfriend and his two daughters join us as well as my best friend from second grade and her significant other and their four-year-old daughter. That’s just my wing of the table. My parents, their spouses, my brother and step siblings and their respective spouses and children, as well as a handful of other extended family members and longtime friends and neighbors, are all in attendance.

As I sat at the table at my mother’s on Thanksgiving evening looking at the fantastic sunset, I was filled appreciation for  the opportunity to break bread with so many people I am lucky enough to call my family. I am thankful to my parents for making Thanksgiving a better experience for me and for teaching me that traditions may be tailored to fit the circumstances. I feel grateful that my sons have the opportunity to experience Thanksgiving surrounded by so many who love them. Even if they do not fully appreciate it now (they too, are wary of Claire's turkey, stuffing, gravy and cranberry sauce) they are being raised in an inclusive and open-minded environment where gratitude and family are experienced by many, in different ways, together.