What is the divorce rate in America?

Rates of divorce on a State-by-State basis 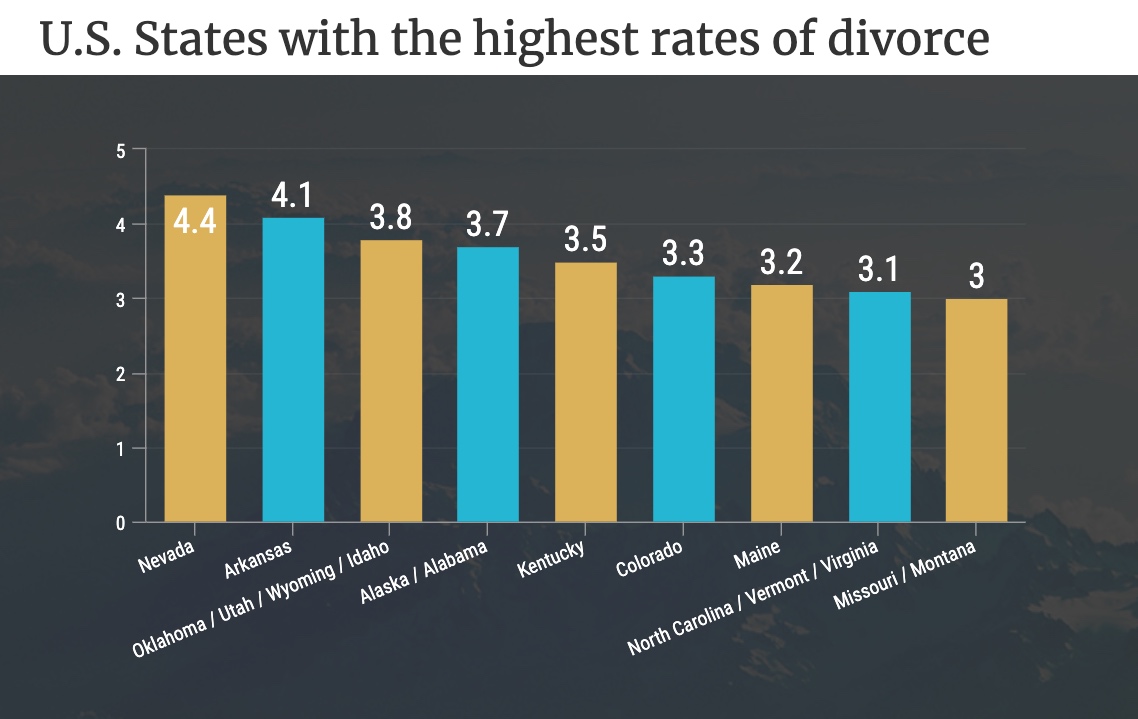 U.S. states with the highest rates of divorce 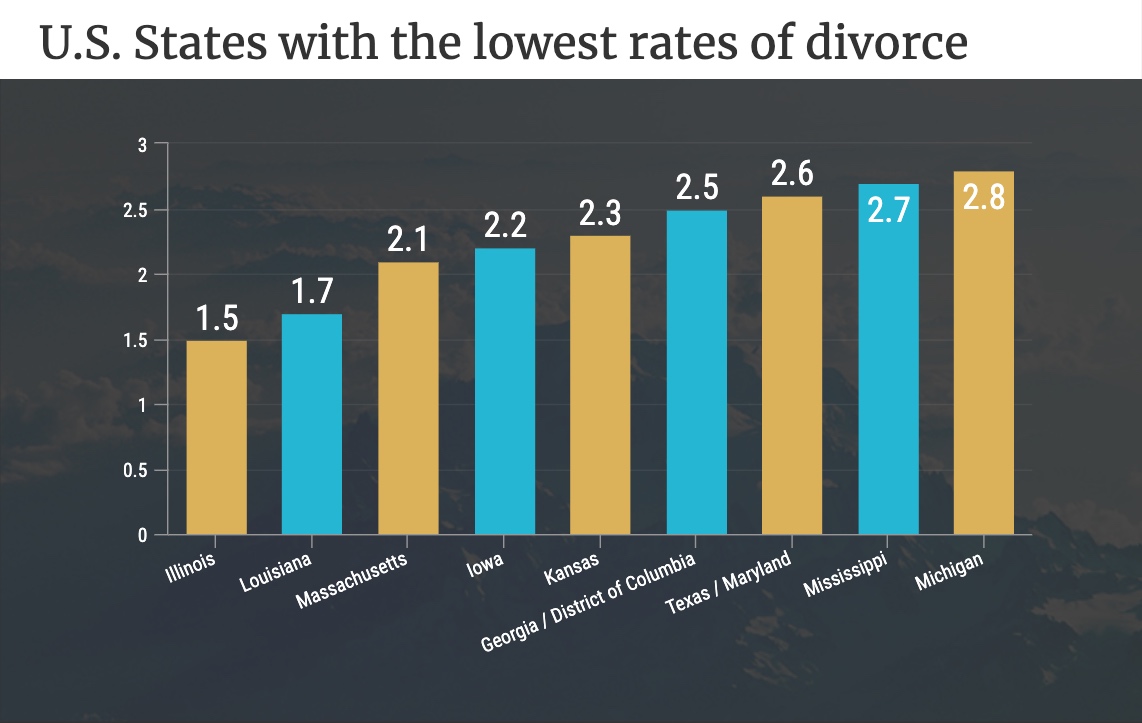 U.S. states with the lowest rates of divorce

Rates of divorce across the U.S.

The Rate of Divorce for Women


How does the rate of divorce differ for women?

Women get divorced at a significantly higher rate when you separate the data. 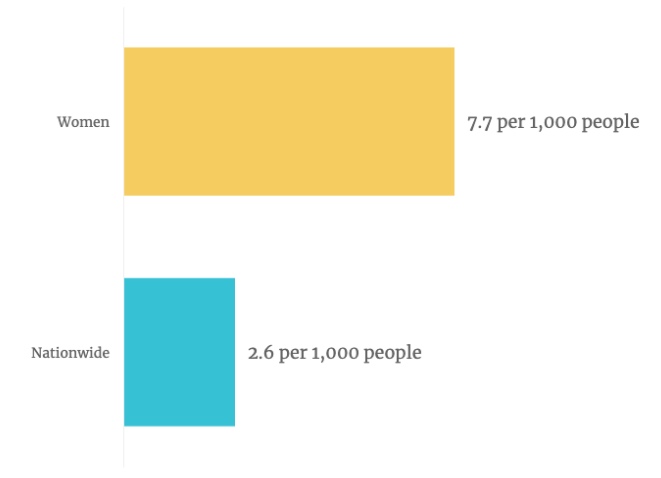 States with the highest rates of divorce for women:

The following states have the lowest divorce rates for women:

Rates of divorce for women across the U.S. 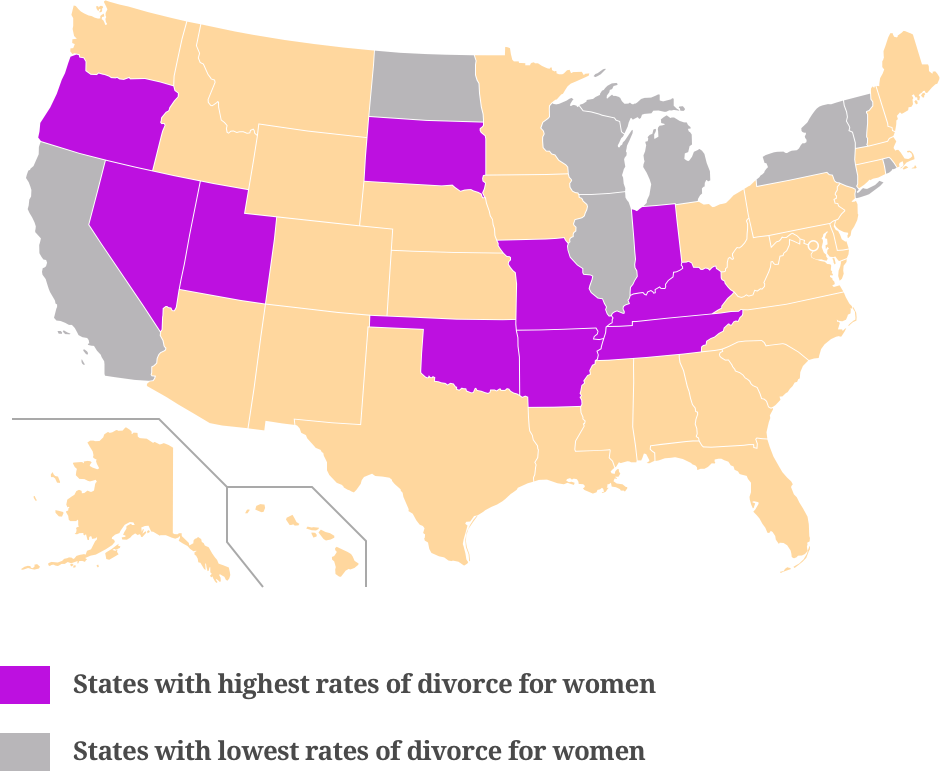 What is the rate of marriage in the U.S.? 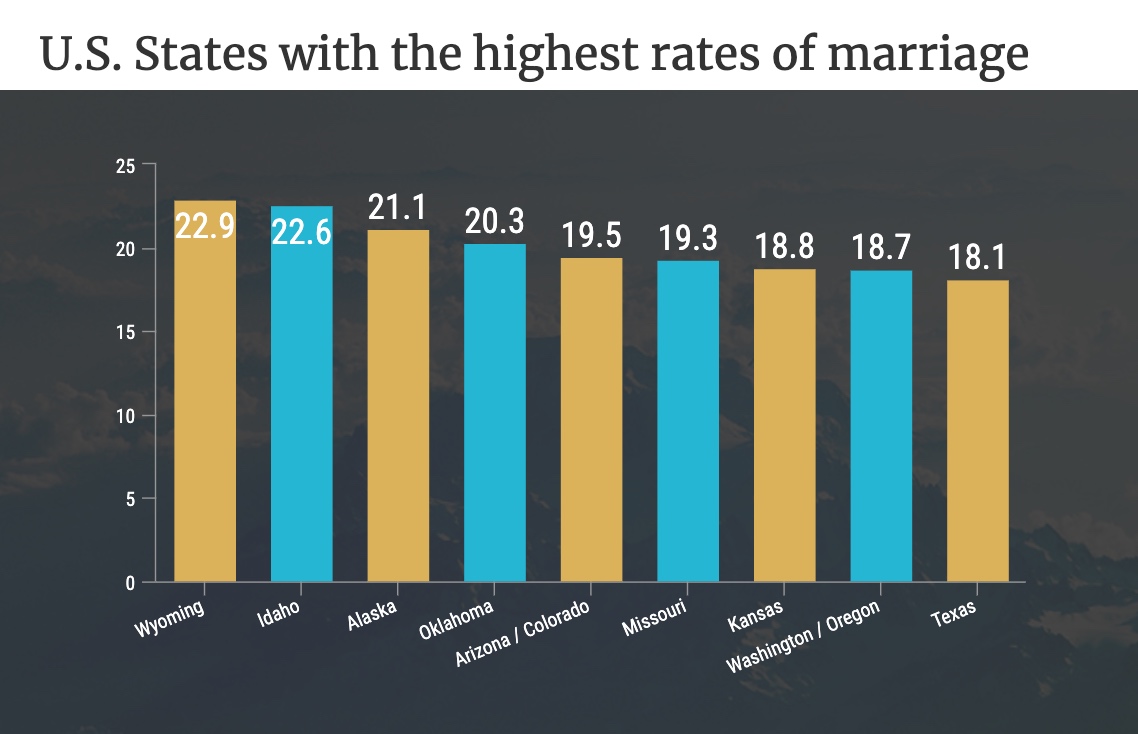 U.S. states with the highest rates of marriage 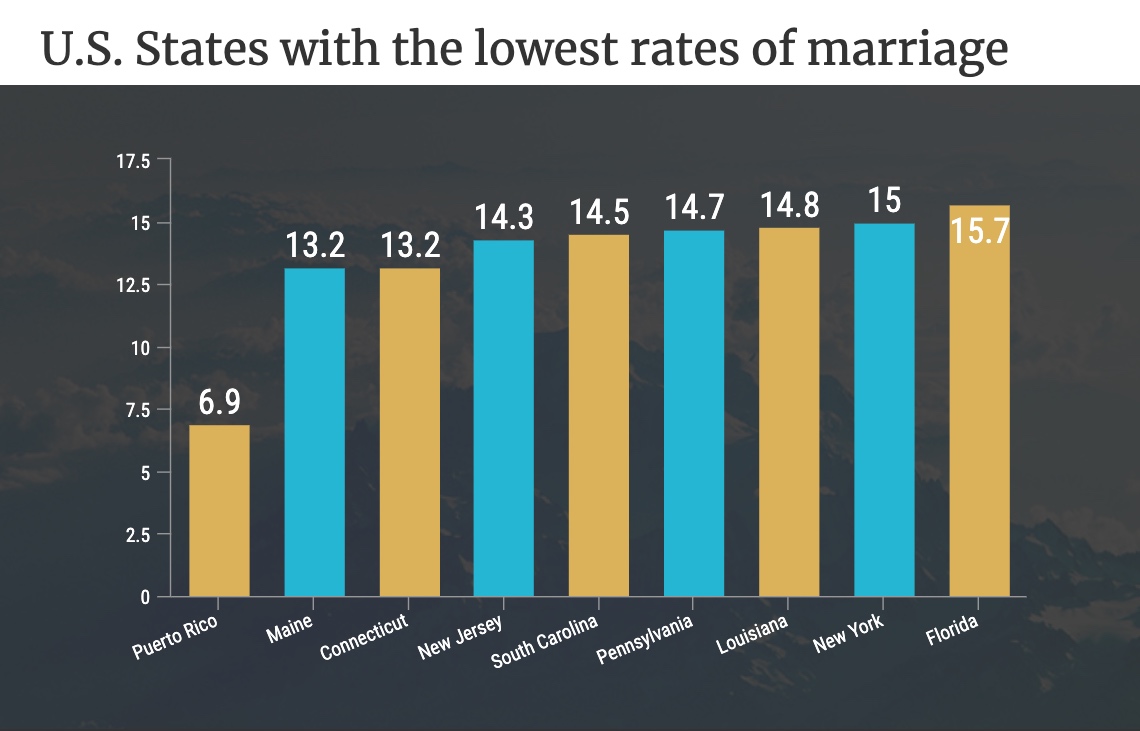 U.S. states with the lowest rates of marriage

Rates of marriage across the U.S. 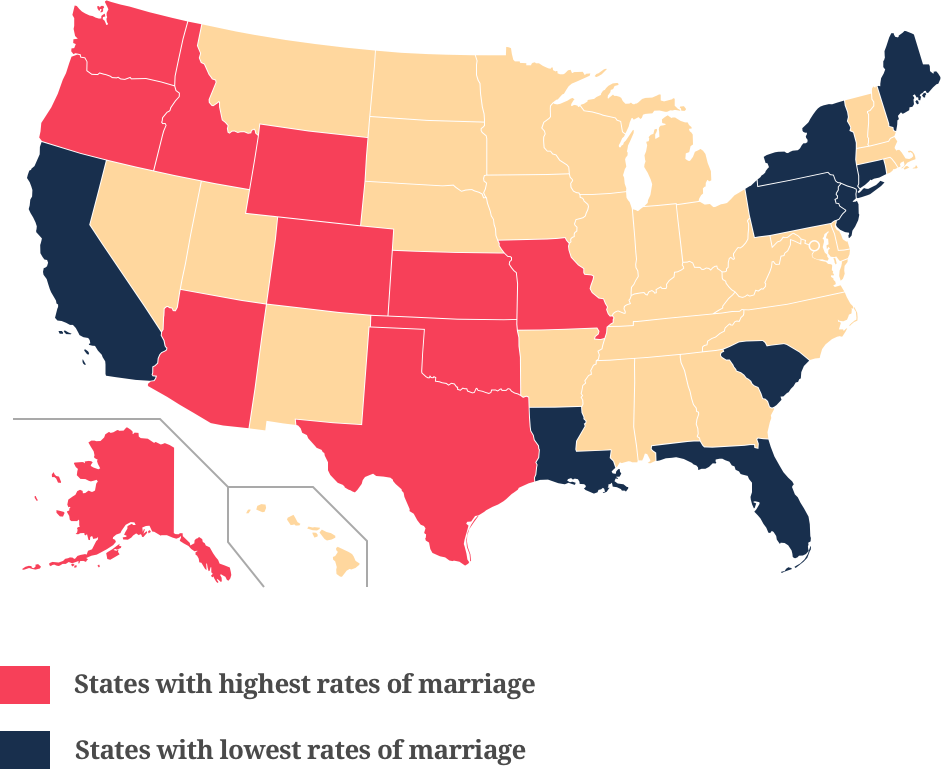 How does income impact divorce?

The US states with the highest median income:

The US states with the lowest median income are

Median income levels across the U.S. 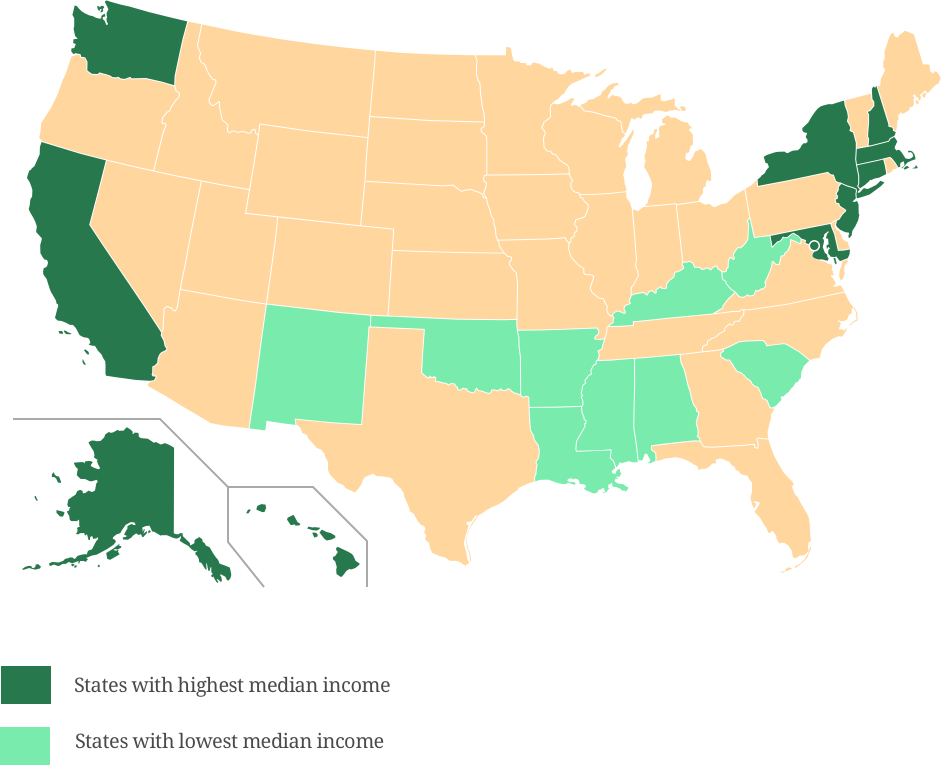 Income also impacts the decision to get married, which in turn has an indirect effect on the rate of divorce.

In 2018, the Census board reported that:

A significant number of couples say that income is a significant barrier to getting married.

In what year of marriage is divorce most common?

Of the 40% to 50% of marriages that end in divorce, the average marriage makes it to about 8 years of marriage.20 That’s at the time of filing for divorce, so this data does not include how long divorce attorneys might battle it out before officially filing.

It remains to be seen whether there is any difference in these trends between same sex and opposite sex couples.

What is the most common reason for divorce?

Other common reasons include

What are the most common reasons for marriage?

How does age impact divorce?

Divorce is increasing in some age cohorts, such as Baby Boomers and Gen X, while decreasing for Millennials. Millennials represent the largest demographic in terms of population numbers, so the reduction in their age category has shifted the overall rate of divorce downward.

Trends in divorce rates among Baby Boomers have been dramatic. Following the era of their parents, the “Silent Generation”, Boomers who came of age in the late 70s and early 80s started to divorce at a rate not seen prior to 1970.26

Rates of divorce by age group:

How does age impact marriage?

Millennials are the only age group to see a reduction in both divorce and marriage rates. According to a 2018 report by the Fertility and Family Statistics branch of the Census Board, in 2013:

The reports posits that events such as the Great Recession of 2008, increasing home prices and the high financial burden of student loan debt that millennials incur create barriers to marriage and creating a family.31

How does age at marriage impact the likelihood of divorce?

In general, the younger one is when they get married, the more likely they are to ultimately get divorced.32 The average age of divorcing couples in America is about 30 years old, with divorcing women skewing a little bit younger than divorcing men.33

According to the most recent estimates, the average age of those getting married for the first time is 27.4 for women, and 29.5 for men.34

How does education impact divorce?

Twenty-five years earlier, the marriage rate was above 60% for each of these groups.35

What is the divorce rate by ethnicity?

Marriage rates vary significantly across race and ethnicity. In 2015:

How does race impact marriage and divorce?

Ethnicity can also be a predictor of divorce. Asian Americans are the least likely to get divorced of all, with an estimated 18% of Asian American women and 16% of men experiencing at least one divorce in their lifetimes.40 Next up are those of Spanish/Hispanic/Latino descent, among whom about about 30% of women and 27% of men will experience divorce.41

Caucasian Americans fall right in the middle, with 38% of white women and 36% of white men going through divorce at least once in their lifetimes.42 Black men and women both experience at least one divorce at a rate of about 42%.43

Finally, Native Americans are at the highest statistical risk of experiencing divorce, with 44% of men and 45% of women ultimately ending one or more marriages.44

Are children of divorce more likely to experience divorce themselves?

Both men and women whose parents divorced are more likely to marry other children of divorce, but this effect is amplified in women over their male counterparts.47

However, if your parents are divorced, don’t let the fear of dooming your own children to the same fate stop you from having kids -- couples who have experienced the birth of at least one child are 40% less likely to split up than their childless counterparts.48