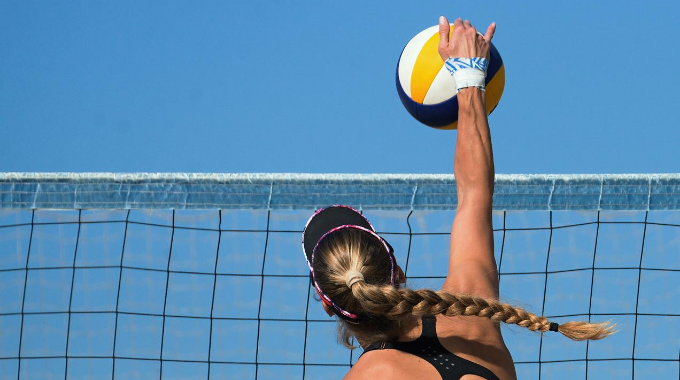 Breaking up With a Career - My Own Story

Written Exclusively for It's Over Easy by Charlotte Wasserstein, Esq.

I’ve never been married, so obviously I’ve never been divorced. But I did recently make a drastic career move that felt like a breakup, and which taught me many of the same lessons I imagine come along with a divorce.

In May 2011, I graduated with honors from Harvard Law School. I then passed the California bar exam, clerked for a federal judge, and became a litigation associate at one and then another of the most prestigious law firms in LA. In early 2019, my firm told me they would nominate me for partnership as long as I billed the required (tough but not crushing) number of billable hours. In September 2019, I quit my job to open a small business offering beach volleyball classes in Santa Monica.

Wait, what? Yes, you read that right. Beach volleyball.

I’m not one of those people who says, “I’m a recovering lawyer,” or one who hates the profession. I loved my job on a day-to-day level. I looked forward to walking into my beautiful office with its lovely view, ensconced in a triangle of people I admired: in the office to my right my boss whom I absolutely idolized, in the hallway in front of me, his spitfire assistant whom I loved to gossip with, and in the office to my left a fresh-faced first-year associate whose enthusiasm was contagious. And I loved the intellectual rigor of the work, the writing and the research, the pomp and ceremony of the courtroom.

But after 8 years of practice, I looked around my life and thought, “Wait, what happened?”

I was single (and being 36 and single in Los Angeles makes you basically a spinster), had an ulcer, bad hair and skin, had become snappish with my friends and family, barely ate, exercised compulsively, slept poorly, and was nursing a long-simmering substance abuse problem. The main issue was that I had always been afraid of and detested something that is at the very core of lawyering: conflict. I’d always just assumed I’d get used to it. But I didn’t.

What’s tricky is that I didn’t hate my life. Just like I imagine some people don't hate their marriage--though it may be unfulfilling, it wasn’t the worst thing ever, and it looked really great from the outside. But it felt like I was in a waiting room, working hard and saving money for some future happiness that I couldn’t define. And before I knew it, I’d been in that waiting room for 8 years.

I took stock, and asked myself what I actually wanted my life to look like in an ideal world. I tried to think of people I’d met over the years who led lives I’d be excited to lead. One was a family friend who had a good enough job at a good enough college and lived with his wife deep in the woods in Massachusetts, where they grew vegetables and went on ambitious hikes. Another was a couple who lived in San Diego and owned a yacht on which they chartered events and tourist cruises. Another was the couple who ran the small bakery where I worked in high school, who spent much of their time at their cabin in a remote part of New Hampshire.

These people had a few things in common. First, their lifestyles involved being outside in nature much of the time. Second, they were not only married but happily married - they spent a lot of time and did a lot of activities together. Third, intriguingly, none of them made much money. Without me noticing it, over the years, I had lost all interest in fancy things. I am baffled by the desire for designer goods. I’m not in any way a foodie - if Subway had a nice ambience I’d eat there every meal. My ideal vacation is to go camping. All of my favorite activities are all virtually free: volleyball, running, hiking, reading, hanging out with my cats or my friends’ dogs, tennis, listening to music.

Now it’s pretty obvious that making partner at a multinational law firm generally will not lead to a life outdoors with lots of time to spend doing activities with your significant other. And few would argue that the major upside to the job of being an attorney is making a ridiculous amount of money, which was supposed to compensate for the rest of it all. So it became clear to me that I was on the wrong track.

I’ve played beach volleyball almost every weekend for the last 8 years. It’s by far my favorite thing in the world: it’s an amazing workout, it’s outside at the beach, and it’s a great way to meet new people. I met my ex-boyfriend playing volleyball, and many couples I know met through the sport as well. (This makes it a great post-divorce activity, by the way!)

As I was walking to my car after a game one day in the summer of 2019, I thought to myself: “How curious - beach volleyball is my favorite thing I ever do, and it’s literally free.” And like the shrewd and callous lawyer I’d become, my next thought was: maybe I could monetize it!

For years I’d heard people complain that there aren’t any great ways for adults to learn how to play beach volleyball in Santa Monica - for kids there are plenty of choices, but for adults there is only one city contractor running infrequent, crowded lessons and a smattering of un-permitted individual instructors who may or may not respond to your texts. There was my exit plan: I’d open a business in Santa Monica offering beach volleyball lessons for adults. I’m in no way qualified to teach myself, so I’d hire some pros. I’d do it right - get a permit, have a set schedule and reservation system just like a yoga studio, and provide high-quality classes.

Telling my firm I was leaving felt just like a breakup: it was me, not them; I was so grateful for the wonderful time we’d had together and I’d learned so much from it; I hoped we could stay on good terms and in each other’s lives; I’d worked hard to find ways to make it work for me but I just lost hope that it could. And I was sad. I was sorry.

My last day was September 6, 2019. I spent the next four months planning the business, called simply Santa Monica Beach Volleyball. We opened January 7, 2019, and we already have 5-star Yelp reviews, about 50 unique customers, over 500 followers on social media, and a bunch of regulars. I love seeing people come off the court after class with a huge smile, and set out on their day being happier for having done something healthy, outside, and social.

To be sure, running a business is adversarial. But unlike the law, the core of it is not conflict itself. Instead, it’s creating something collaboratively with my instructors and putting it out into the world for people to enjoy and to enrich their lives. I will likely practice law again in some fashion in the future; I admit, I miss many aspects of it. And I got bills to pay, after all, and this whole volleyball thing may not pan out.

Leaving the law was painful, scary, and expensive. Just like a divorce. But I don’t think I’ll ever regret it. Starting a business has already helped me gain self-awareness, courage, and financial realism. Just as, I imagine, might happen after a divorce.

Charlotte is the owner of Santa Monica Beach Volleyball, a business that opened in January 2020 and offers beach volleyball classes for adults (18+) in Santa Monica.  She graduated from NYU in 2005 with a B.A. in philosophy, and graduated cum laude from Harvard Law School in 2011.  She spent eight years as a practicing attorney, serving as a clerk for a federal judge and then as a litigation associate at a multinational law firm.  She lives in Culver City, and you can most often find her playing beach volleyball at Ocean Park beach in Santa Monica, or at a cafe working on her horror movie screenplay.